Cut off from the world

St. Helena is a local place and out of the way of the world. It doesn't always care so much – or, perhaps more accurately, notice – what the rest of the world does.

Weather forecasting, for example, is not a hi-tech long range global analysis, but rather a wonderfully local and personalised service: You go out in the morning, and if you get wet it's raining; If you are squinting, then it's bright and sunny; and if you fall over it's either a windy day or you are still drunk from the night before - possibly both. If you need a proper long distance forecast, you phone a friend/family member on the other side of the Island and ask them what is happening there...

Whilst obviously the global 'Credit Crunch' – and i'm only now not mentally thinking that it is a breakfast cereal – has affected St. Helena and will continue to do so, in practical terms it hasn't really reached here at all. The islands bank (singular) has had no exposure to daft American style mortgages, chiefly because there are virtually no homes bought/sold on the Island. Houses are inherited/passed on through families, or new ones built on family land. Indeed, in practical terms St. Helena is doing well out of the world crisis, as the prices of one of the most expensive imports – fuel – has been cut by almost 20%, and a whopping 46% for fishermen. In the short term at least, we're up on the deal.

In fact, the Island probably wouldn't really notice the global credit crunch at all, until the RMS St. Helena suddenly fails to appear (breakdowns excepted).

Which brings us to the airport project.

An airstrip was first pondered as early as 1942, when the Americans expressed interest in building one for use as a military staging post between Ascension Island and Cape Town/Southern Africa. In the 1950's, BOAC (who eventually became prt of British Airways) even offered to fund the building an airport, with the idea of using it as a refuelling point for flights between London and Australia via the South Pole. In more modern terms, discussions started in the 1990's with the UK government looking at the finances required to replace the RMS St. Helena after the end of it's scheduled life in 2010, and concluding that an airport would be better value for money than a new ship & it's running costs. That's when the fun started.

A private company offered to finance and build a fairly small airport, but the British government, in their wisdom, said no and put out to tender for a larger airport. I have not the time, space or inclination to go into the subsequent 15years or so of farce, but suffice to say that much of it could have come from Yes Minister and that basically no money has been spent on anything else since (everything is awaiting the go-ahead and beginning of construction of the airport). As of December 2008, the project is now officially “paused”, and with less than a year before the ship is due to be retired – and suffering from increasing reliability issues – absolutely nothing is currently happening on the ground.

A simple breakwater or wharf which has long been required and requested (and a proper one desired – after all, it's not as if ships arriving at St. Helena is an unknown occurrence...) to make it safer for passengers and easier for moving freight remains a pipe-dream. This lack of breakwater mean't that when the cruise ship Aurora (with 2600 people on board, including crew) arrived a few weeks ago for what should have been the biggest business/financial day of the year, not a single passenger could come ashore due to the choppy January seas. Which for the island would basically be like shutting all shops for December and January (eg: Christmas shopping and Jan sales) without any notice or chance to buy something anywhere else. It is a financial disaster of huge proportions. And this is not the first time it has happened. 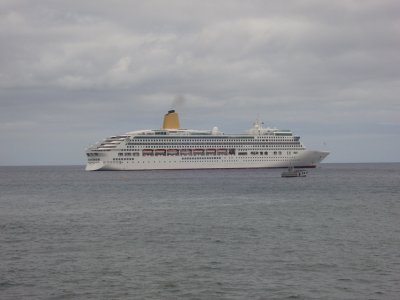 The cruise ship Aurora in James Bay, but unable to let any of her 2600ish inhabitants on shore due to choppy seas

The airport project itself is notable in that 2 small hills need to be removed and a large gorge filled in, in order to give a long enough space for a runway, which even then will have a 250m drop over sheer cliffs to the sea at each end: This is not a runway where overshooting the runway would be a good idea... Add to that strong prevailing crosswinds (into mountains), an area which is regularly covered in fog, and absolutely no alternative airfields nearby in case of weather or technical problems and life gets increasingly interesting. Indeed, the airport needs to be able to handle larger planes than really required, just so they can have enough fuel to return to the Namibian coast, in case of aborted landings. Which of course means a longer runway. Even better, due to – ahem – issues with Ascension (a really long story, just as messed up as this one), it means that Saints won't actually be able to fly direct to any of the 3 places which are of relevance/interest to them: The UK, Falklands and Ascension, currently forcing Saints working on the Falklands, for example, to fly via London and Cape Town to reach St. Helena. For those on Ascension, the trip to St. Helena will actually take longer and cost several times more (although all fares for Ascension employees and their family get paid as part of their work contracts): Their current 700mile boat trip being converted into a 3plane-12,000+ mile extravaganza.

And the airport probably isn't even the biggest part of the project: Arguably a larger problem is getting the stuff to build it on to St. Helena: A new freight port is envisaged, together with a haul road across the island (in a valley where no road currently exists due to it's geography) which needs to be built before the materials to build the accommodation that the people who will be building the airport will live in can be imported and put in place. And don't even ask about the fancy new hotels, golf courses, power stations, water supplies et al that 50,000 new rich tourists a year will be requesting.

Like the mythical Crossrail project (first proposed in 1897), this is one project that nobody has distinguished themselves with. 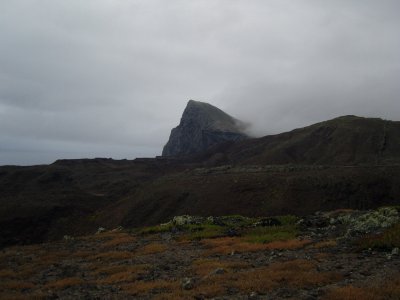 Not the best of photos to help explain this, but basically the airstrip would start to the right of the picture. Planes come through the mist (to the right of, and trying to avoid, Great Stone Top – that big lump of rock sticking up) just past the lower rocky mountain visable, and start landing just the other side of the gorge of which the top bit is visible in the photo – and which i had just staggered out of – which will be filled. It then hits the brakes like heck and everybody prays that plane doesn't slide of the approaching cliff and into the sea, 300m below. Welcome to St. Helena!

Welcome to the wonderful world of St. Helena and the UK bureaucracy's inability to ever do anything sensibe WRT to the island!
My daughter and I both hope that one day we will be able to revisit, but the lack of an airport makes it even more of a dream..