So long, and thanks for all the fish

I've conjugated my last Saint verb (I is, you is, we is, he is, she is, it is, they is, us is). I've sadly eaten my last coconut finger and plate of pilau, and drunk my last shipwreck. I'm back aboard the RMS St. Helena, and the island slowly fades from view. It is bathed in glorious evening sun and the dolphins are playing around the ship.

I never really had any idea what to expect before I headed to the Island. Part of me was literally sh1t scared at the thought of being stuck on such a small remote lump of rock for so long (as a comparison, the 4mnths i spent on the island is the longest spell i have been in any one country for well over 10years, and even 3month spells have been very rare) and I had visions of hating it so badly that I would be attempting to leave within 3days by swimming and aiming for Brazil (for those that are unaware, my swimming technique is generally known a drowning and i am unable to even float unaided). But Iloved it.

So beautiful, so friendly, so rewarding, so fulfilling. I can't even give a specific high point a there have been so many. It truly is an amazing little island. And there is so much I haven't yet managed to do. And yes, i'm already plotting how and when i can go back. Hopefully for a longer stay.

As for now, It is time to leave. I have things do, people to meet and new places to explore. The next episode of the adventure starts here.

(((with apologies for the huge delay in entries. I've been lacking such luxuries as electricity and internet for teh last 6weeks or so. Hopefully more entries will follow in the next day or so))) 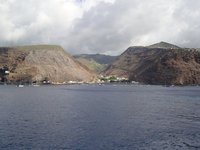